How sick kids can maintain contact with their school 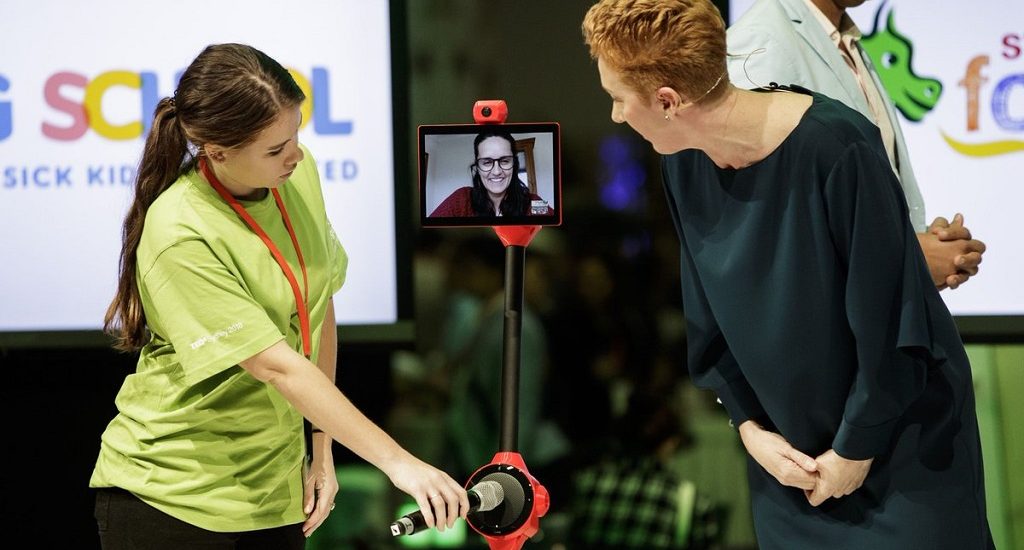 A fleet of telepresence robots that helps sick children maintain contact with their schools is capturing the attention of parents around the country following a successful pilot project in Canberra.

The robots, that enable two-way video and audio communication between sick students and their teachers and classmates, is the brainchild of local entrepreneur Megan Gilmour. She says being based in the national capital was instrumental to her success.

“Canberra is really a Petri Dish when it comes to innovation,” Megan said.

“It is a great environment in which to pilot things. It’s a small territory but one with a lot of intelligence and clout.”

Inspiration for Megan’s not-for-profit organisation, MissingSchool, came from a deeply personal event. In early 2010 her son, Darcy, became very ill and was diagnosed with three rare blood disorders. The following two years were consumed with long hospital stays and treatments including a bone-marrow transplant.

“During this time, Darcy couldn’t attend school and was missing out on both academic and personal fronts,” she said. “He could not interact with his teachers or spend time with his classmates.”

Megan became aware that this problem of isolation was not limited to her son. “We identified a gap between sick children and the academic and social interaction they get from their schools,” she said.

“Many experience isolation when they can’t go to school and this can have a significant impact on their learning progress, their mental wellbeing and their future.”

Across the nation it is estimated that 60,000 seriously ill children are missing out on school for weeks, months and even years.

“It keeps sick children up-to-date academically and socially and gives them the emotional support they need during some of the toughest times in their lives.”

It was this situation that sparked the idea for establishing MissingSchool. Working with two other mothers, she initiated and co-wrote a report on the issue which was released in 2015, studied solutions in six overseas countries through a 2016 Churchill Fellowship and, in June 2017, secured funding for this national-first. With $600,000 from St George Foundation’s Inspire Grant, MissingSchool began the pilot in Canberra in September 2017.

“Over the course of three-years, we will place up to 100 robots in schools across Australia to demonstrate that continuous connection is possible between seriously sick children and their classrooms when they are absent,” she said.

More than half way there, MissingSchool is getting attention for the innovation, globally.

Each robot is equipped with a video screen, camera, microphone and speaker. Students access them using their laptop, tablet or smartphone and enjoy two-way video and audio communication with fellow students and teachers. The student can move the robot around their classroom by remote control, from hospital or home.

Megan said growing MissingSchool from a concept to a national organisation has taken tremendous work, but it would have been even more challenging if not for the support that Canberra offers as a location for entrepreneurs.

“Canberra is unique because all three levels of government are together in a relatively small environment,” she said.

“This has meant we’ve been able to undertake a pilot project in the ACT and then sequentially expand to other states, working through state and territory governments.”

She said a big plus about being located in Canberra is the ease with which you can network and get introductions to high achievers and well-connected influencers across all fields – something made possible because of the city’s relatively small size.

“While I was able to engage with the Education Directorate at the Territory level, I was also able to make connections in the Commonwealth Department of Education and Training which is literally a stone’s throw away from Entry29, where I co-work,” she said.

“This proximity is great because it saves time, but also because of the access that it affords to high level decision-makers.”

Megan said it’s possible to get things done in the ACT that would be much harder to achieve in other places.

“It’s easy to get quick wins as you are only ever one or two degrees separated from people who can make things happen,” she said.

“An organisation such as MissingSchool is a great example of the types of endeavours that can flourish in Canberra,” Petr said.

“The close relationships that exist here between government, academia and entrepreneurs enables new ideas to thrive.”

Not one to rest on past achievements, Megan has also been busy establishing a new for-profit company, Robots4Good, with Marcus Dawe and Erica Hediger – two highly-respected entrepreneurs she met through the Canberra Innovation Network.

This company will extend the technical learnings achieved through MissingSchool, with exclusive robot reseller rights in Australia for US company OhmniLabs to make telepresence robots available in a range of other sectors, such as aged care and disability.

“We’ve developed the know-how in assistive robot service integration at scale,” she said.

“I believe we’ve only really scratched the surface on what can be achieved with telepresence technology.”

This article was originally posted on The Educator.