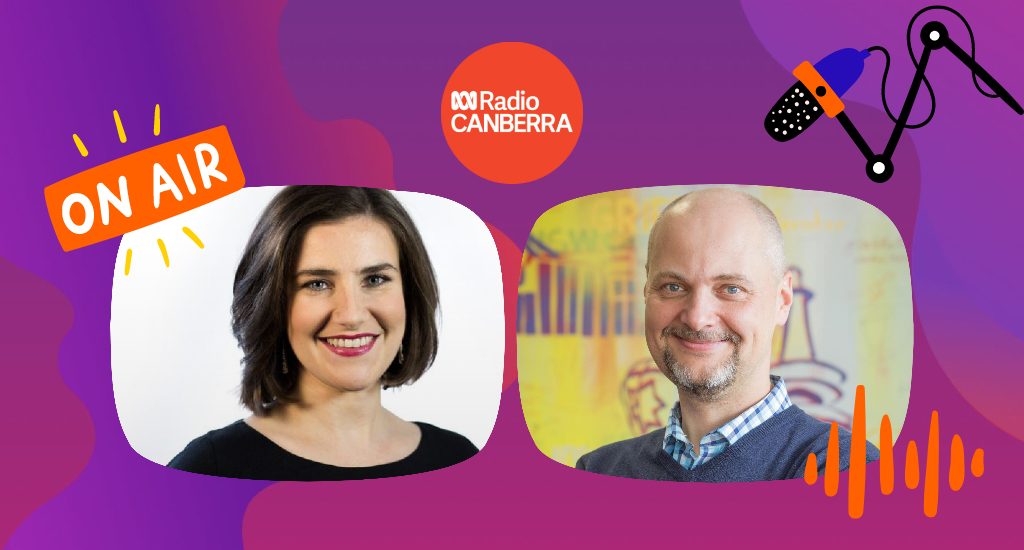 On Wednesday the 7th of April, CBRIN CEO, Petr Adamek was invited to chat to Anna Vidot on ABC Canberra’s Drive Program about the announcement that ACT Government wants to make Canberra the ‘cyber capital of Australia‘ through the Canberra Cyber Hub.

Anna Vidot: As the National Capital, I think it stands to reason that Canberra is a hub for all kinds of expertise, but one growing area that the ACT is hoping to capitalise on for the future is cyber security. Between people already working in the field here, the research and education institutions already well established and a pretty highly skilled workforce overall, the ACT Government reckons that Canberra is well placed to become a leader in cyber security. And to that end this week, the ACT Government committed $700,000 to establish the Canberra Cyber Hub. They say that it will cement and build on the city’s capabilities, further diversify the ACT economy, all in an area which the Commonwealth expects to boom over even just the next three years. Getting a slice of that money to speed up the growth of small and medium enterprises in the field is the Canberra Innovation Network. Its chief executive is Petr Adamek. Hello, Peter, how are you?

Anna Vidot: What do you make of this plan to establish a cyber hub for Canberra?

Petr Adamek: I think Canberra already is a cyber hub. It is the next logical step that ACT Government now commits to support this at a bigger scale. We have a number of emerging companies, startups, and already established SMEs that are supplying to the government in the area of cyber security. And it’s globally a very important field. If you think about IT in general and it’s boom in different stages, the next stage is the one where we will need to better protect our intellectual assets, our data, and how people behave and how they can rely on these systems. You would understand that we are all now relying on technology, and it’s very important that this is secure. Canberra has such a fantastic potential to do this really well, and it’s partly because of the big customers and the spenders in this area. And we can capitalise on that, we can actually use the investment in education as well in this area and come up with unique innovations that can be used here and exported overseas.

Petr Adamek: It’s a very wide range. I’m an engineer myself and I actually studied cybernetics, but I’m always amazed to see the breadth of activities these companies are engaging in. A lot of them evolve from IT (pure IT) but they would be ranging and reaching into other sectors as well. This is where humans interact with technology and often this is not just about the technology itself, but it’s also how we as people work with it. So you can imagine it having a reach into psychology, sociology and other areas of study of human activity. We have training companies here who will do simulations for you and emulate threats and hacks and other kinds of activities and see how a company is responding, how the workforce in the companies are responding to it – are the processes working right? Is the governance right? Is the risk managed well so that the company and its assets are protected? There are also testing ranges, there’s hardware that needs to be tested, whether it can be used in secure environments, etc. There’s really a whole range of activities from data storage to supercomputing. It’s really wide.

Anna Vidot: So, to invest in this Canberra cyber hub, as we mentioned the ACT Government committing $700,000 – you guys at the Canberra Innovation Network, Petr Adamek, will be getting some of that. What exactly is the Innovation Network’s task here? What will you be doing?

Petr Adamek: We were asked to organise an accelerator program for existing businesses and SMEs. You can imagine it as a sort of a fitness program for companies in which we’ll be focusing really on identifying and developing new customers with those companies. A lot of them have emerged having that one customer, that one ‘use’ and they are now developing IP in those companies, and that has a potential to be multiplied. Those customers can be in Canberra, but we can be looking also for customers elsewhere. So we will be working over 10 weeks with a cohort of companies to help them find new customers and identify how their unique capabilities can be sold at a scale so that the market can be broadened and those companies can grow and create new jobs. And we have a lot in Canberra that enables that, but in Canberra Innovation Network, in particular, we have a range of programs that help people build companies that can change the world. We have been doing this in a sector-agnostic way, in a way that’s available to any company from AgriTech to IT – but we will be focusing specifically, thanks to this extra funding, to do it in the cyber security space where Canberra has a potential to grow really fast and be the national capital and play a very important role globally.

Anna Vidot: I can only imagine this is going to be a competitive field, Petr Adamek. Part of the reason why the ACT Government says it wants to make this investment is because the Commonwealth is predicting a 35% increase in Australia’s spending on cyber security just over the next three years, which would take us to $7.6 billion in Australia being spent on cyber security. The Commonwealth reckons there are more than 7,000 additional jobs nationally to be had in the field. What do you think gives Canberra the edge as a hub to make us the place that could really benefit from that boom?

Petr Adamek: Well, a number of things really. I think that we are highly networked as a community, there are collaborations here among the companies themselves, but also with the educational institutions and the different institutions that use cyber security (such as Department of Defense or Australian Signals Directorate, ASIO, etc.). There’s a number of customers here that have very specific needs in cyber security and they need the top talent and specialists who are already here. We also have the prime defence contractors here who are participating in some of these tasks and so the number of people who are cyber security experts here, per capita is the highest in the country. That concentration itself is a fantastic resource from which all of these companies can source from and can incubate on it. We also have the Canberra Innovation Network as a source of experimentation and support and mentoring that is available to those companies, so I believe that we are really on the cusp of something significant in cyber security. Some of the companies that are already growing here are just amazing and phenomenal.

Petr Adamek: In my opinion, what we need to see is more jobs created in the private sector in cyber security, because right now we still have quite a concentration of jobs in the public sector. What we are working on for a number of years now, is diversifying the local economy. In the cyber security space, as well as in other key areas of our competitive advantage, we are trying to help people build companies that can grow exponentially and have customers around the world. So for me, success looks like diversity of specialised companies in cyber security and being the best in the world in some specialist fields within cyber security. My big dream is to have billion dollar companies here that have been created by the smart and talented people from Canberra, and cyber security is a space where this can happen.

Anna Vidot: So how do you get started? Will you be seeking out companies to work with, do they come to you? How’s that going to work?

Petr Adamek: Yes, we will launch a campaign very soon asking cyber security companies, (the emerging ones as well as the established ones) to put teams through the accelerator program. It can be either the whole company, if it’s a small startup or it can be a particular team in a bigger company that has an innovation project that they would like to test its market potential for, and they will be given a 10 week challenge. You can really imagine it like a fitness challenge. They will be working through finding new customers and will be sharing this among the cohort, and they will be working with mentors and experts who will help them connect and succeed in this.

Anna Vidot: Really interesting to see how it all unfolds from here, Petr Adamek, I really appreciate your time this afternoon. Thank you.

Petr Adamek: Thank you so much. Have a nice day.

Anna Vidot: Petr Adamek is the chief executive of the Canberra Innovation Network. As he was outlining there, the Network is one of the beneficiaries of an ACT Government commitment of $700,000 to try and establish a Canberra Cyber Hub to make the ACT, not just a nation leading, potentially world leading/competing hub for cyber security as well. We’re a city with a lot of expertise, so we’ll see how much of a share we might be able to get in what is expected to be a huge boom, not just in spending on cyber security in Australia, but in job creation too.