Surviving and thriving in a globalised knowledge economy 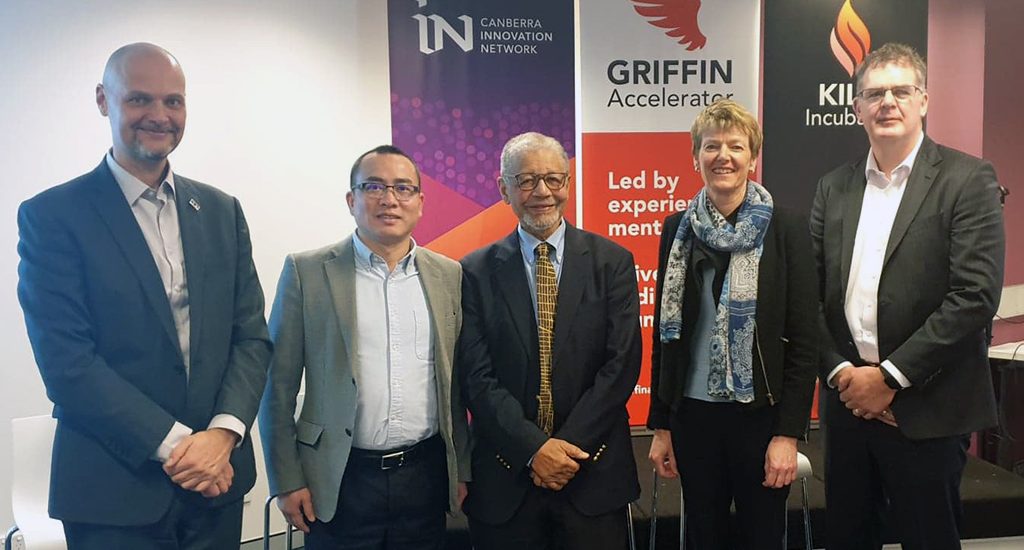 The role of place is such an important ingredient in seeding the emergence and growth of new innovative ideas. People come up with these ideas in spaces where they can interact with each other, observe problems, experiment, learn, collaborate and fail or succeed in an atmosphere that is conducive to creativity, innovation and entrepreneurship.

“It doesn’t have to be luxurious and it doesn’t have to be large, but it does have to be pumping with the passion of the people involved,” Petr Adamek said whilst opening Crafting Innovative Places conversation and book launch this week, speaking about the nucleus of any city’s innovation ecosystem.

On Tuesday the 30th of July, as part of the Public Sector Innovation Month, Canberra Innovation Network invited the authors of Crafting Innovative Places Edward J. Blakely and Richard Hu to join Leanne Cover, CEO of the Canberra Institute of Technology and David Lawrence, General Manager of the Growth Centres Branch of the Department of Industry Innovation and Science for a discussion about Canberra and its potential to emerge as a placed-based innovation model for many cities around Australia and the world.

Petr Adamek, who led the panel discussion, focused on the role of places and networks in the global war for talent that can encourage more entrepreneurial innovation. “How is Canberra standing, what are we doing well and what can we do more of?”

“Canberra is probably the only city in Australia to be able to claim the ‘knowledge city’ status,” suggested Edward pointing at Canberra’s unique characteristics of:

The city planners, the community and the entrepreneurs should dictate what the place for innovation should look like, not the current market claimed Edward as he spoke about the importance of city planning in fostering the collaboration needed to grow the global competitiveness of a place. “When you try to make a city, you don’t want to make it the same in every place…Diversity, that is the key to unleashing knowledge capacity.” Edward continued to elaborate that the goal of any innovative place must not be to reduce complexity and simplify the innovation system, but to embrace the complexity and ever-changing conditions to further develop the place’s capacity to adapt.

Richard believes that in order to win and succeed in a global knowledge environment, we must be more comfortable with taking risk. “If we work together to create a risk-taking culture that is tolerant of failures and encouraging of entrepreneurship, that is the key element for us to survive and prosper in a globalized knowledge economy.”

“How can we increase complexity and work with more creativity?” asks Leanne Cover when discussing the role of skills in the knowledge economy. “The pace is incredibly fast …the role for any institution has become more challenging, we must adapt and evolve.” The Canberra Institute of Technology empowers its staff and students to take charge and become more intrapreneurial by leveraging the same methods that entrepreneurs use to develop and scale their innovations. “It is more about connections between things than about the things. … When you connect people up, you create new jobs”, Leanne summarised.

David Lawrence thinks Australians by their nature are innovative but that we often take it for granted.  He stated, “We have to be creative in the way we recruit, and we need to encourage movements within the public service and around outside of the public service to promote diversification.”

Canberra has an outstanding opportunity concludes Edward, “You got the best incubator in the world for human talent, the key is keeping it!”

If you are keen to learn more about how the continued processes of globalization, urbanisation and innovation interact to shape innovative places or how innovative places can be better crafted, pick up a copy of Crafting Innovative Places by Richard and Edward.