Tech23 promises to hurt your head with innovative ideas. 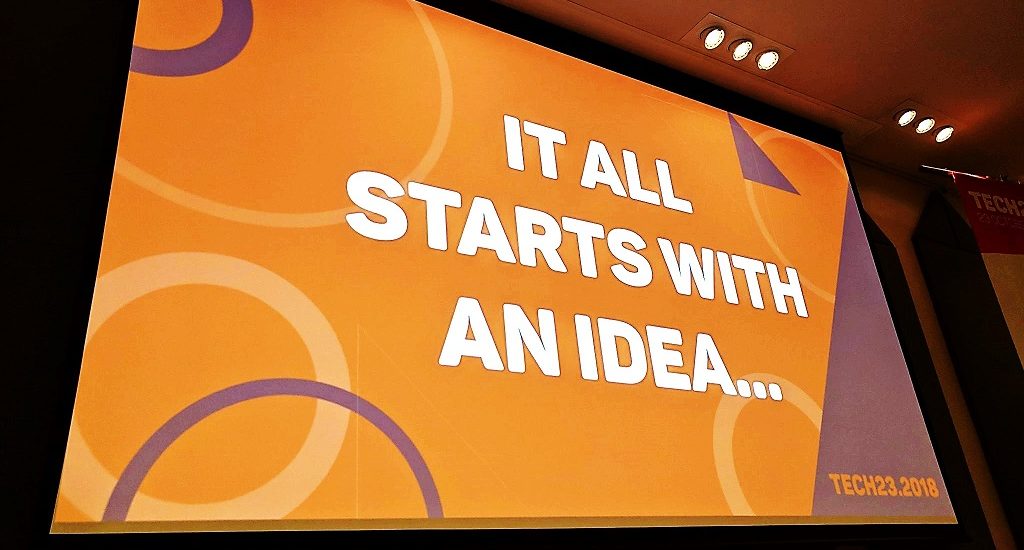 On Tuesday 23 October, our Growth Advisor Arthur Pappas caught an early flight to Sydney to attend Tech23, here’s what he had to report.

This week, 23 deep tech startups from around Australia, as well as a healthy few hundred members of Australia’s innovation ecosystem, descended upon the tenth annual Tech23 event in Surry Hills, Sydney.

Promising to ‘hurt your head’ with innovative ideas and powerful business models, Tech23 2018 delivered, with 23 pitches from startups taking on big problems in big industries.

Take NextAero for example; CEO Graham Bell and his super smart team of rocket scientists are building a next-gen, 3D printed, aerospike engine which will make delivering payloads into orbit significantly cheaper, and yes, they have a working prototype, and it is very cool.

If open banking is your jam (c’mon, for who isn’t it), check out Split Payments out of Byron Bay. They’re re-inventing direct debit to get rid of nasty dishonour fees, time-wasting onboarding processes, and the opacity of current transactions. I had the pleasure of meeting their CEO Kristofer Rogers, who told me how the founders of Split we’re also the founders of Skydive Australia and so are used to navigating challenging regulatory environments.

From the ag-tech sector, Livestock Labs CEO Tim Cannon told us how in the past, farmers intimately knew the behaviours and health problems of each of their livestock because they only had 30 head. Today, where farms in Australia have tens of thousands of head, farmers need a product like EmbediVet, an implantable IoT sensor which will allow farmers to monitor their livestock’s health in real time. Cannon is also a renowned biohacker, who himself has several implants; he is also just generally a really funny and quirky dude.

If your body is your temple or you just want to find out what the composition of your gut microbiome is, look into Microba. They make a test kit which will tell you what the balance of good vs bad bacteria is in your gut and suggest ways to improve it. In CEO Blake Wills’ pitch, we heard how far research into gut health has come in the last few years, and that some scientists are even suggesting that the gut microbiome should be designated an entirely distinct human organ.

In the session on Physical Spaces tech, the pitch from udrew Founder and CEO Tom Young stood out for me. If you’ve ever wanted to build a fence, a pool, or extend your house, you’d know the litany of processes and approvals you must go through with councils in order to get it done, not to mention how costly it can be. udrew is a DIY planning and approval platform which allows the user to design their project over a satellite image of their property. Choose your materials and get an automated ‘health check’ on your design’s level of compliance with local rules and voila, submit to council for approval. Check out Tom’s appearance on Jason Calacanis’s podcast ‘This Week in Startups’ from earlier this year.

Finally, in the last session of the day, head hurting and almost at capacity, we heard from our very own Canberra representatives, Questagame. If you don’t already know, Mallika and Andrew Robinson have built the Pokémon Go of the real world. Utilising Augmented Reality (AR), players compete in ‘Quests’ to earn points by taking photos of and identifying animals in nature. Their innovation is two-fold, by utilising tech to encourage people to engage more with their surroundings, they are gamifying the collection of crucial biodiversity data which can then be used to assist in conservation efforts. And represent us they did! Questagame went home with 4 accolades, including ‘most backable startup’, nabbing themselves $5k cash and $5k worth of legal advice from Addisons.

I haven’t mentioned yet that each session involved a panel discussion with some of Australia’s industry leaders, including such notable figures as: Louise Herron – CEO of the Sydney Opera House, Alex Zelinsky – Chief Defence Scientist at DST, Daniel Petre – Partner at AirTree Ventures, and Petra Andren – CEO at Cicada Innovations, and many more. The dots were joined at the end of the day by CSIRO Chairman and former Telstra CEO, David Thodey AO who, after praising the 23 pitchers and the event in general, talked briefly about Mark Dodgson, Professor of Innovation at UQ, and how we should do more to involve thought leaders such as Mark in future events.

People come to Tech23 for the awesome pitches and quality discourse provided by the expert panels, but they stay for the networking. The crowd itself is an attraction at Tech23, and they know it. Every session is broken up by tea breaks where quality conversations can be had, relationships built, and likely deals made.

And they certainly nailed it this year.