The innovative collision of sports technology 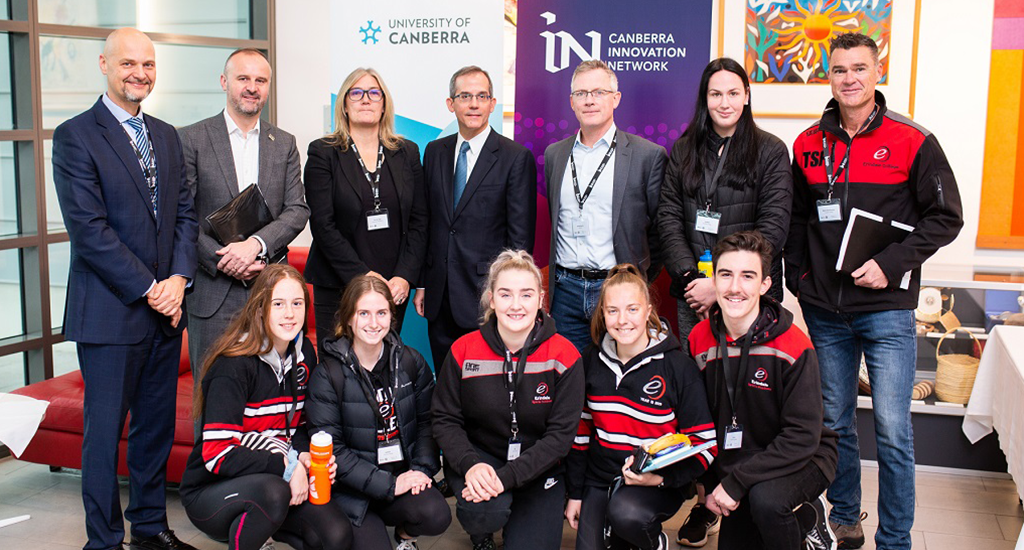 On Tuesday the 27th of August, the Canberra Innovation Network in partnership with the Embassy of the United States of America, held a SportsTech Collaborative Innovation Day at the University of Canberra. The day featured keynotes from sports tech industry leaders, panels on technology and breaking into the US market, as well as collaborative sessions tackling topics in the sports technology world.

Andrew Barr, Chief Minister of the ACT opened the day with a message about Canberra’s innovation potential as a sports tech hub of global significance and how the relationship with the United States can help us achieve that. “Today represents an opportunity for the odd random collision, not of the sporting kind but on an innovative kind” he said.

The Deputy Chief of Mission of the Embassy of the United States in Canberra, Thomas Hodges, elaborated on the strong and growing relationship between the US and Australia in trade and sports, “We hope that today’s program plays a small part in helping promote the best and the brightest ideas in Australian sports technology to my country and to the whole world.”

Dr Carrie Graff and Dr Gordon Waddington followed by introducing the participants to the world of opportunities for sport tech innovation at the University of Canberra.

Perspectives from a Sport Scientist

Dr. David T Martin is the former Director of Performance Research and Development for the Philadelphia 76ers and was the first keynote speaker for the day.

He believes that sports tech in elite sports revolves around the belief effect. At the elite level, he comments that people are in the business of motivating people, and the technology really plays a role on giving coaches and athletes something to believe in.

David also focused on the data side of sports tech. He believes that to be a successful technology company for sports, you need to be able to collect data that has real world application to produce real results. The example he used was Gymaware: Local Canberra startup Kinetic Performance’s product Gymaware measures barbell performance to outline areas for improvement, velocity and power. David had Gymaware installed in the 76ers gym because the data collected by the product produced analytics and insights to improve the team – it wasn’t just a fancy addition to the gym.

How has Sports Tech helped and hindered your career?

The key to sports tech is to focus on the problem you are trying to solve, then partnering with the right people who understand the tech. The panel agreed that athletes get bombarded with the latest tech that might not do what they need it to do. Lauren Burns gave an example of how her rowing team was approached by oar makers to work with the team to create the best oar possible. By working together with people who had the answer to their actual problem, they were able to see real results.

When asked how technology had hindered, Kim Brennan spoke about the stresses of comparing sporting abilities to other elite athletes. With technology being able to track extreme specifics beyond diet and exercise, when does the human become a product? The positive and negative effects of social media on athlete’s concentration and mental health was also explored by the panel.

Breaking into the US market

A big part of this panel was about having confidence in yourself and preparing for “no”. Going to the United States (the largest sports tech market in the world) is not only expensive, but it is a huge step. Ben Bowley said a key thing to remember was that not everyone will be your customer because there might not be a fit. Heather Lawton added that you need to remember to listen to what the customer is saying, and back yourself.

While the panel agreed with David’s statement that “if you can sell in Australia, you can sell in the United States,” they explored how cultural differences in business can be surprising for Australian entrepreneurs.

Lauren Burns is a Taekwondo Olympic Gold Medalist and current PhD Student at RMIT. Lauren focused on one particular use of sports tech – recording and watching other people.

Lauren shared a story of when she lost her first match at 16 years of age. Lauren went home after her first loss, and decided she wanted to do better. She shared that one of the biggest things that helped her was filming her technique. She was able to watch how she looked when she was fighting and watch videos of other taekwondo athletes to compare. It is a simple technique with big results, and she managed to become the world’s best.

The collaborative breakout sessions explored several topics including how to define the sports tech industry, how to engage more youth in using sports tech, how to leverage benefits of sports tech for the broader community or how sports tech is assisting prevention of injuries.

Get involved and find out more about events like this by subscribing to our newsletter!