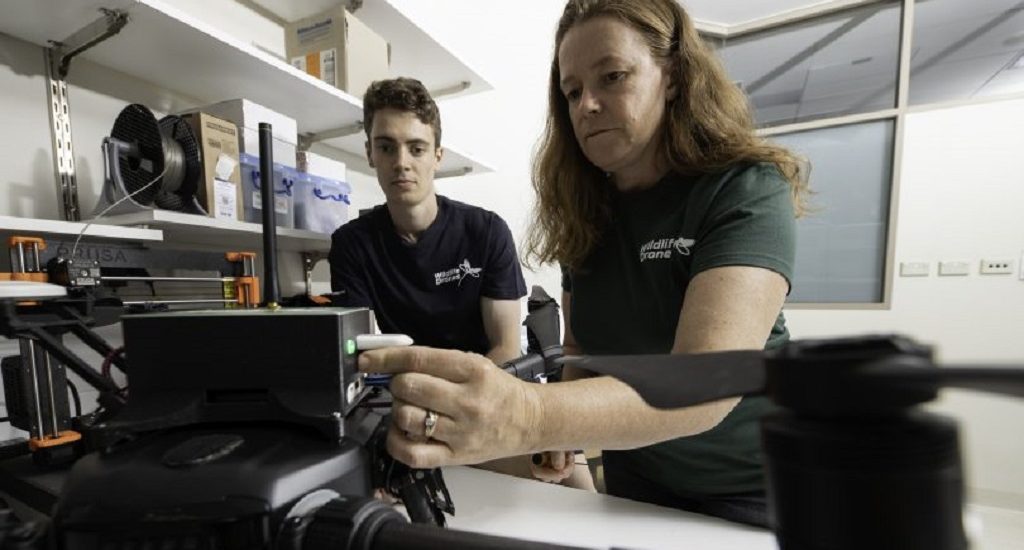 After finding herself with a unique problem involving small birds and sore arms, Dr Debbie Saunders had a bright idea that has now turned into a revolutionary piece of technology which has just cracked the global market, including in the US.

Wildlife drones were born while the Canberra ecologist was studying movements of the critically endangered swift parrot for her PhD at ANU.

“The birds are so small that we could only use tiny radio tags, but because they flew such long distances, tracking them on foot did not work,” says Dr Saunders.

She says smaller animals are more difficult to track than large species, such as elephants or whales, simply because you’re limited to using tiny radio tags.

Back in the day, you had to hold up an antenna in the air and walk around on foot to track them – hence the sore arms.

“So the idea came to me at the time to use drones,” says Dr Saunders.

According to her, the higher you are, the more likely you are to pick up a signal. With a drone, you’re no longer at the mercy of the landscape that has to provide you with a high point.

“The drones offer a whole new level of capabilities,” says Dr Saunders. “They can travel much bigger distances and you can go into areas that are not accessible on foot.”

Then, in 2016 while looking after young children at home, Dr Saunders envisaged the technology largely as a research project – until she started to get requests for her technology from businesses.

“My initial response was, ‘I don’t know, I’m just doing this for myself and my own work,’” she says.

“After these initial requests from businesses, I started getting involved with innovation events to find out how you actually went about translating a prototype into something commercially viable.”

Instrumental in this process was the Canberra Innovation Network, which Dr Saunders credits as a constant source of mentorship.

The more success they got, the more inspired Dr Saunders was to continue, to see if there was a market for it.

“Now we have investors, customers in Australia and overseas, as well as a team of seven full-time staff and some casual contractors,” she says.

Dr Saunders says a lot of animal tracking is done because researchers are interested in finding out about the animals’ movements.

This is the same if you’re looking at endangered animals or pests.

“In the case of an endangered species, you want to know where the animals are going and what their behaviours are so resources for conservation programs can focus in the right place,” says Dr Saunders.

It’s vice-versa for pests. If you know where they are going, you’re better able to manage them.

Recently, the team has been tracking koalas in bushfire-affected Numeralla. With the drone technology, the animals are able to be left alone and can be located from much further away than previously possible.

Now, they are looking to expand into the agricultural industry, and are looking at ways for farmers to improve mustering processes, or simply to be able to know where their stock is at all times.

The technology has been eagerly picked up by state governments charged with conservation efforts and land management, as well as by zoos operating captive breeding programs around the country, private landholders, non-governmental organisations and environmental consultants.

Some recent exciting news for Dr Saunders and the Wildlife Drones team has been the interest from the overseas market.

Non-profit wildlife conservation organisation Save Vietnam’s Wildlife, based in Vietnam, has already picked up the technology, and Dr Saunders and the team will soon begin exporting to the US market.

Original Article published by Lottie Twyford on The RiotACT.