HomeNews & StoriesInnovation StationFeatureBentspoke’s Astro Beer Is Out of This World

Bentspoke’s Astro Beer Is Out of This World 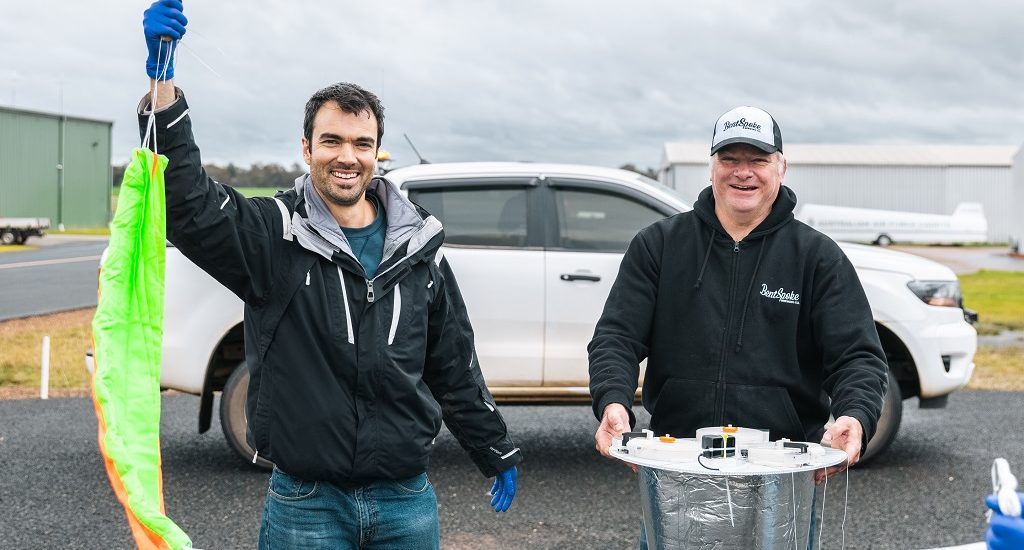 BentSpoke Brewing Co. along with Australian aerospace company SuperSky Engineering have teamed up to brew a beer using yeast captured at the edge of space, thanks to a National Science Week seed grant from Inspiring Australia.

“We’re living our mantra of bending the rules of beer by capturing yeast from Space to use in creating a beer that is out of this world!” said Richard Watkins, Head Brewer and Co-Founder of BentSpoke Brewing Co.

Richard and James Gilbert home brewer and co-founder of SuperSky Engineering, both having a passion for brewing and craft beer, wanted to explore new possibilities for beer ingredients. The idea for Astro Beer was put in motion.

The campaign started by launching a high-altitude balloon from Temora NSW, with a custom petri dish contraption containing a nutrient that would act as a source for the yeast to latch onto. When the balloon reached the stratosphere (between 23km and 30km above Earth), they collected their sample.

Upon the balloon’s landing (with a flight time of 2.5hours), the BentSpoke team took the sample back to the lab at the cannery in Mitchell ACT. The team was able to extract a single yeast deposit, which they combined with a combination of elements to ensure its safety and growth to be used in a new brew!

“As an amateur brewer myself, I’ve wanted to try this for years,” said Dr Gilbert, who was named one of Australia’s Most Innovative Engineers by Engineers Australia in 2020. “National Science Week is an ideal opportunity to partner with a bold and creative brewery like BentSpoke and use the result to spark a science conversation with the public.”

Manik Mahajan, a self-proclaimed ‘Professional Common Sense Exerciser’ at Reposit Power and not-so-closeted Space Nerd says that National Science week is an opportunity for people across Australia to experience just how marvellous the world around us can be.

“The fun thing about doing sciency things as a researcher, teacher, or a plain old enthusiast is that you stand on the shoulders of giants, to share your curiosity, and unravel the magic that sits behind everyday things. Science week unites people of all ages every year who share such passions,” says Manik.

This isn’t the first time BentSpoke have made headlines with their wild concoctions.

Back in 2019, Canberra Innovation Network collaborated with BentSpoke for the Innovation Showcase on a beer aptly named The Innovator. Containing local yeast harvested from Canberra air thanks to ANU Research School of Biology, a hangover relief drink made from Australian grown Korean pears created by Prepear Drink Company, Future Superfoods’ ground crickets, and dried black soldier fly larvae from Goterra.

Petr Adamek, CEO of Canberra Innovation network says that innovation has no borders.

“Entrepreneurs must be creative in finding new ways to differentiate their products. I am excited about the heights to which a brewing business can take their offering to engage better with their target audience,” said Petr.

“We say it all the time – innovation is for everyone, not just scientists or geeks, innovation has many forms and when you leverage your team’s creativity and open collaboration. Even the sky is no limit for where you can go.”