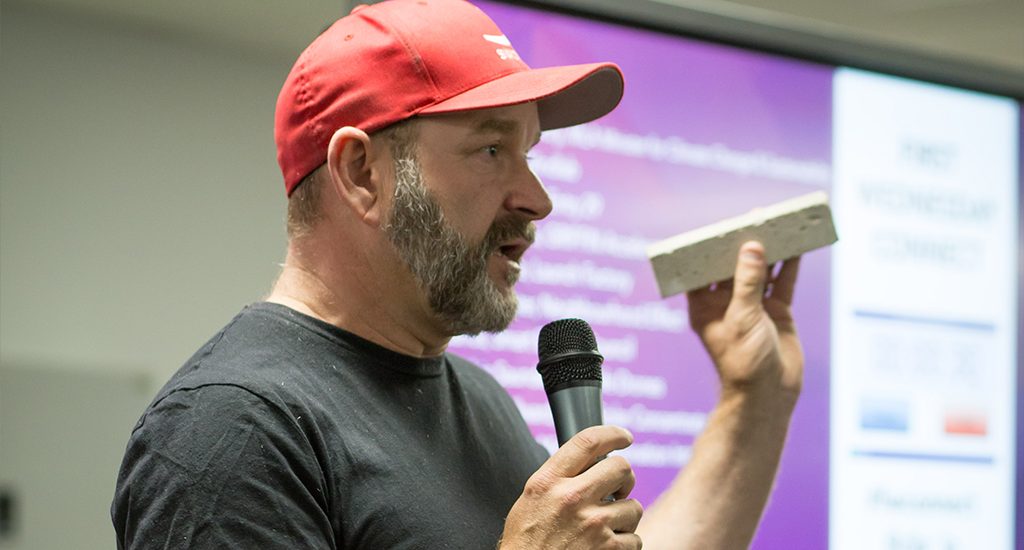 As governments around the world search for ways to reduce carbon outputs and slow climate change, an Australian company has developed a way to generate money from the process.

Canberra-based Mineral Carbonation International (MCi) has developed a technology that can profitably capture carbon and transform it into building materials such as cement and plasterboard. The company estimates the global market for its technology could be worth more than $1 trillion by 2030.

“When we started out back in 2007, there wasn’t a market for carbon, but we knew that one would come,” MCi Chief Executive and Managing Director Marcus Dawe said. “However, everyone expected that it would be in the form of a tax or some sort of carbon credits system. Our approach is to have things that make economic sense to adopt so you don’t have to rely on subsidies.”

Last year, MCi completed a five-year pilot involving the design and construction of a carbon reactor system. The facility is a purpose-built research plant for CO2 mineral carbonation and its construction was supported by funding from the federal and New South Wales Governments and explosives company Orica.

Marcus said the technology involves a process of treating rocks that enables them to become super absorbers of carbon. Once captured, the gas is solidified, thereby removing it from the atmosphere.

Dubbed mineral carbonation, the process has the potential to store millions of tonnes of carbon indefinitely.

“We are using the same process that’s used by nature,” Marcus said. “The key difference is that we can achieve in an hour what would take nature thousands of years.”

For Marcus, a key part of the development of MCi was ensuring its technology had the potential to scale and make a significant difference in the push to lower global carbon emissions. The company is currently in talks with large building products companies about how its technology could be put to work.

“What we have done, along with a range of other companies, is to create an industry for carbon,” he said. “We are going to use carbon as the basis for making a range of new products.”

The company is currently focused on designing a demonstration plant that could process between 5000 and 10,000 tonnes of CO2 each year. The aim is to then scale this by a factor of 10 every three years. Eventually, it is anticipated each plant will be able to process 1 million tonnes of CO2 annually.

Marcus said MCi is working with a range of organisations to confirm the economics of the process. He estimated that a commercial mineral carbonation plant could be built for around $50 million and will have the potential to generate $30 million worth of building materials each year.

“We didn’t know, going into this, how the economics would stack up. Now we know that, if we build one of these plants, it could pay for itself with[in] 18 months.”

Marcus is no stranger to emerging technologies and start-up businesses. Since the early 1990s, he has built a range of successful businesses in areas such as software development and internet publishing. He is currently Entrepreneur in Residence at the Canberra Innovation Network where he works with start-ups in a mentoring capacity.

“Canberra is very much a global village when it comes to entrepreneurship,” he commented. “It’s become a touchpoint for what is happening in many places around the world. It’s very much an innovation capital in its own right.”

Marcus pointed to the powerful mix of universities, research facilities, government and foreign embassies. All have combined to create a community where people are highly educated and very well connected.

“When people come here, they find Canberra is not the city they expected. It’s small enough to have great quality of life but at the same time large enough to have all the facilities you require together with great links to the rest of the world. It might not be a New York or London but certainly like a Seattle or San Francisco.”

Marcus said he is very bullish about the entrepreneurial future of Canberra as the city has attracted large numbers of people with big plans. “I am a believer in the idea that necessity is the mother of invention. I’ve always been a problem finder because, when you find a good problem, that’s where the value of good innovation can really be focused. That is what is happening in Canberra.”

Canberra Innovation Network Chief Executive Officer Petr Adamek said MCi is a great example of what can be achieved when great ideas are supported. “Here we have a company that’s going to have a significant impact around the globe,” Petr said. “Its success is due in no small part to the critical mass of talent and support that exists in Canberra.”

This article was originally posted on Sustainability Matters.