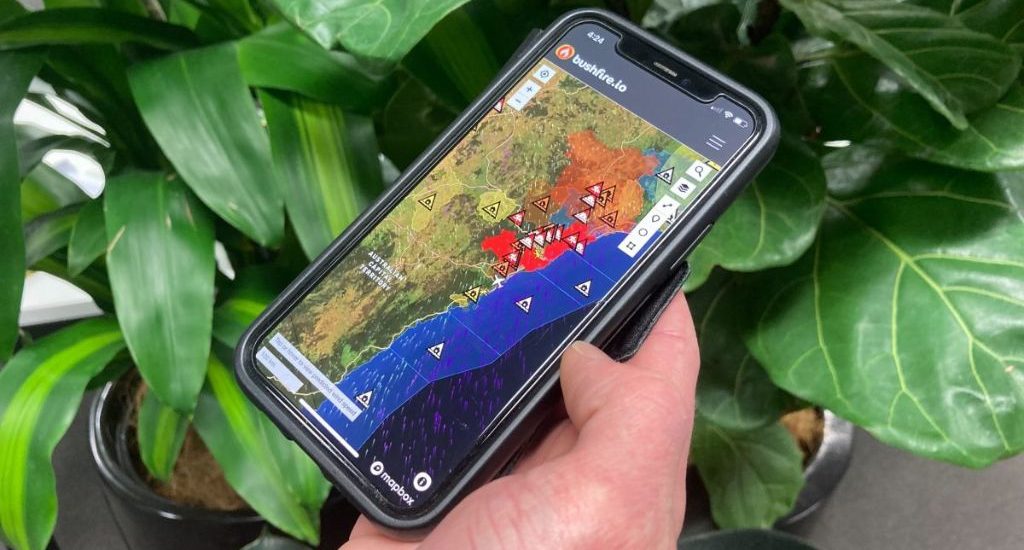 An app designed to save lives during natural disasters is among seven innovative business ideas to receive thousands of dollars of grant funding from the Canberra Innovation Network (CBRIN).

Like many others, Tristan Morris was holidaying with friends on the south coast in the summer of 2019-20 when he found himself surrounded by a raging bushfire. He decided to fill his car with petrol and make a break for it, back to Canberra.

“As I was driving back, there were cars and fire trucks going in the other direction,” he says.

The Fires Near Me app was short on advice for what roads were clear or where the fire might head, but Tristan managed to make it safely home to Canberra. The same couldn’t be said for his mates.

“I discovered that same road was now closed and the town of Cobargo destroyed. All the mates who were holidaying with me ended up stuck.”

It was at that moment he decided to use his education in computer science and software engineering and 18 years’ experience in high-performance computing and data science to make sure no-one else ended up stranded in a natural disaster.

Three days later, the Bushfire.io website was designed to bring reliable information sources together into a one-stop shop.

The creation landed Tristan among the 5500 Australians nominated for an Australian of the Year Award in January this year. It’s now set to receive one of seven Innovation Connect grants.

A partnership between the ACT Government and the Canberra Innovation Network (CBRIN), the Innovation Connect program provides local early-stage businesses with matched funding from $10,000 to $30,000. This helps turn a prototype into a commercially feasible reality.

“The everyday problems we face as a society are confronted head-on by the innovative changemakers we are so fortunate to have in our city. These ideas are changing the way we do things for the better.”

Bushfire.io is set to receive the maximum funding so it can take its success global.

Tristan says the digital platform mostly uses authoritative sources such as the state and federal government, Bureau of Meteorology, GeoScience Australia, and NASA.

“It’s about trying to find high-quality information and putting it together in a simple, intuitive way,” he says.

“So you can see in your hand where a fire is and where it’s headed. You’re given all this information in one place so if you’re driving back from the coast, say, you know where the fire is and which roads are safer.”

More than half a million people have used Bushfire.io in the past year, particularly when fires swept through vast portions of Western Australia earlier this year. Even many firefighters and government departments refer to it for split-second decisions.

“It’s amazing uptake for something that was literally put together in my bedroom, much to my partner’s disgust, especially when I was working on stuff late at night,” Tristan says.

“It was a lot of time, effort and hard work to put it all together, but it’s progressing really well.”

The $30,000 grant will help take the platform into the US, where it will be modified to cater to US-centric natural disasters, and the different information streams, telecommunication companies, and other logistical issues.

“Pretty much everything needed to get it into the US,” Tristan says.

The scope of the original Australian site will also be broadened to cater for other natural disasters.

“We all know floods and other natural disasters are happening more frequently, and the more we can be well informed about these, the less likely we are to be caught out in these as well,” Tristan says.

“But we’re not quite there just yet.”

Tristan had heard of CBRIN’s work since he moved from Melbourne to Canberra for a career in the public service. But it was only when he approached the network, did he realise how much it could help.

“Just by talking to their mentors, I received insights I wouldn’t get by having a chat with someone over coffee,” he says.

“For me, it has been those little nuggets of advice when I have a really tricky problem and don’t know where to start to unpack it.”

At the moment, Tristan says revenue remains one of the toughest nuts to crack.

“It’s a service of massive importance that should be available to people for free.”

Currently, the basic version can be downloaded for free on the App Store, Google Play store, and Bushfire.io website. A Pro version adds extra features for a cup of coffee per month.

The other recipients of this round’s CBRIN grants are AppSec Fast-track, Lingosing!, Powerhaus Zero-Carbon Tool, Vibe Dynamics, RediRobots and The Easy Read Toolbox.